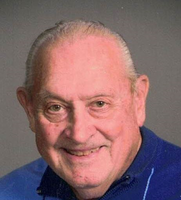 Henry A. Field "Hank", age 85 of Ocean Gate NJ, formerly of Ridley Park PA, passed away on May 18, 2021. Hank was a U.S. Army Veteran, where he played in the band. He later went on to graduate from West Chester University before continuing to achieve his Masters from Villanova University. Hank worked as a teacher and administrator for Penn Delco School District before his retirement. He was a dedicated member and served as Treasurer at Trinity Lutheran Church in South Philadelphia, and was a current member of St. Paul's in Beachwood, NJ. Hank played baseball in Delaware County for many years and was a lifetime Phillies fan. Hank also enjoyed spending his time fishing and boating. He is predeceased by his wife Barbara Field, and sister Edna Mae Young. Survivors: Loving father of Donna (Geoff) Moomaw, cherished grandfather of David (Allison) Moomaw and Timothy Moomaw, and dear great grandfather of Lily Moomaw. Funeral Service: 12PM on Tues., May 25, at McCausland Garrity Marchesani Funeral Home, 343 S. Chester Pike, Glenolden PA. Viewing: 6-8PM on Mon., May 24, and 11AM-12PM on Tues., May 25, at the funeral home. Burial: Private In lieu of flowers, memorial contributions can be made to St. Paul's Lutheran Church, 130 Cable Ave., Beachwood NJ 08722.